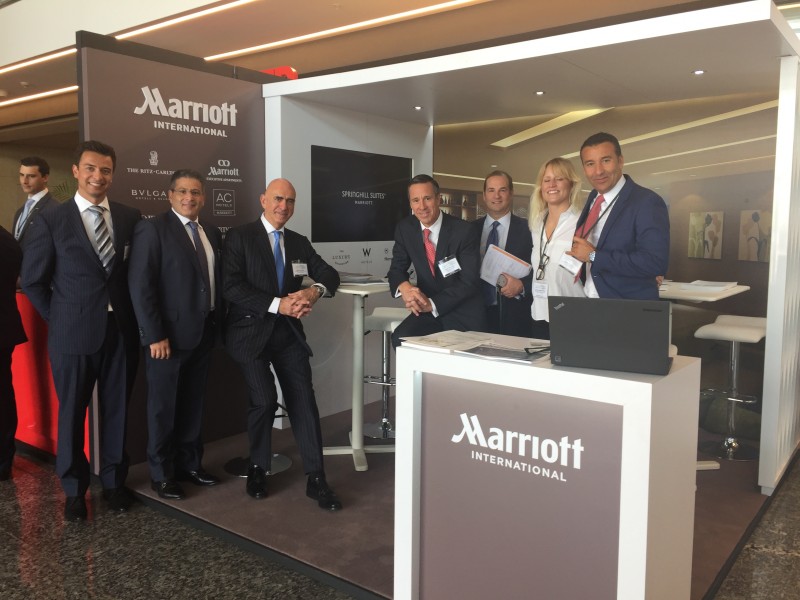 Marriott International (www.MarriottNewsCenter.com) continues its robust expansion across the African continent with news of brand-new signings of new properties in Cape Town, Nairobi, Cairo and Mauritius. This announcement comes hot on the heels of Marriott’s recently completed acquisition of Starwood Hotels and Resorts, which has created the world’s largest hospitality. The transaction has increased Marriott’s distribution in Africa, thus affirming the company’s number one position across the continent.

“The past couple of weeks have seen an incredible transformation for our company, and I am proud to say that we are continuing the momentum with our expansion and development plans across the African continent,” said Alex Kyriakidis, President and Managing Director, Middle East and Africa, Marriott International.  “We officially opened the Kigali Marriott Hotel yesterday, under the patronage of His Excellency, The Honourable Prime Minister Murekezi, and today we announce six new deals across Africa, which when open, are expected to bring our total African property and room count to 205 and 37,000 respectively.”

These new signings comprise over 1100 rooms, and include AC by Marriott’s brand entry into Africa. The Cape Town deals are in partnership with the Amdec Group, Marriott’s long term partner and owners of the new Marriott Hotel and Marriott Executive Apartments Melrose Arch in Johannesburg, announced last year and currently under development.  The Amdec Group has been instrumental in bringing in Marriott International’s global brands into South Africa, as they were the first to announce Marriott Hotels, Marriott Executive Apartments and now AC by Marriott and Residence Inn by Marriott into the market.  The AC Hotel Cape Town Waterfront will be located at the gateway to Cape Town’s waterfront, while Harbour Arch will be the site of the 200-room Cape Town Marriott Hotel Foreshore and the 150-room Residence Inn by Marriott Cape Town Foreshore.

The first deal to be signed since Marriott’s completed acquisition, and further consolidating Marriott International’s presence on Mauritius, the globally renowned Sheraton brand will make a landmark debut on the island with Sheraton Mauritius St Felix Resort and The Residences at Sheraton Mauritius St Felix Resort. Owned by Clear Ocean Hotel Resorts Limited, the resort will be a part of a mixed use development with a boutique retail mall and branded residences. Scheduled to open in early 2020, the resort will feature 152 well-appointed guestrooms and suites and 37 branded apartments and villas.

The first Element Hotels property signed in Egypt will be the largest Element Hotel in the Middle East and Africa. Situated in Cairo’s upscale Heliopolis district and scheduled to open in 2019, Element Cairo is developed by Abraj Misr Urban Development and owned by Middle East Real Estate for Development (MERED). A part of the iconic new smart and ecofriendly development, The Gate Project, the largest housing, administrative, commercial, project in Egypt and the Middle East, Element Cairo will feature 344 light-filled rooms and an atmosphere designed to fuel a life in balance and on the move.

Four Points by Sheraton Nairobi, Hurlingham, is the brand’s second hotel in the city, strategically located in the upmarket suburb close to the city center and within easy access from the surrounding business areas of Westlands, Kilimani and Nairobi Central. Owned by Kamcan Properties Ltd, the 96 room hotel is a conversion from an existing hotel, will be operated under a franchise arrangement, and is expected to open in 2017.

“These news deals are testament to our combined development efforts going forward, as there are significant growth synergies between the brands and our newly combined company, with a focus on expending brands across the region, and looking for opportunities in new markets,” concluded Mr. Kyriakidis.

Continuing to capitalize on opportunities within the region, Marriott International has set a clear objective to be represented in all major gateway cities, commercial centers and established resort destinations while catering to a wide variety of market segments. Each of Marriott International’s brands, including those in the pipeline, target a specific segment and support the increased inflow of visitors within that segment.