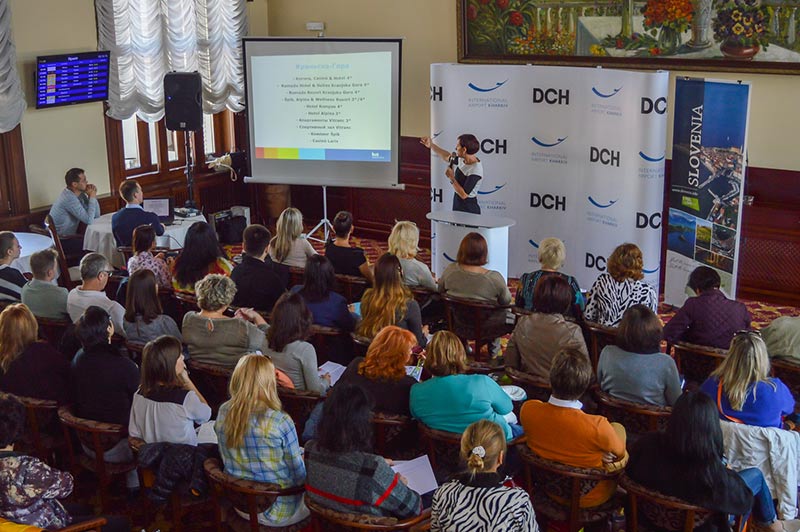 On October 3, 2016, the VIP-terminal of the International Airport “Kharkiv” held a seminar on winter and medical tourism in Slovenia, supported by the Embassy of the Republic of Slovenia in Ukraine and the Honorary Consulate of the Republic of Slovenia in Kharkiv. The event was attended by representatives of more than 50 travel agencies in Kharkiv region.

The speakers of the seminar were:

The participants spoke about the plans for the development of a new route, about the particularities of summer and winter holidays in Slovenia, as well as about country’s tourism potential. Also, the event included presentations of Hit Group’s hotels and entertainment centers and of popular thermal spa “Terme Zreče” (Slovenia).

Slovenia is one of Europe’s most popular and affordable ski resorts. Due to its natural resources, a variety of attractions and well-developed infrastructure, this small country located in the heart of Europe, attracts more and more tourists every year. Those include the winter holidays enthusiasts, who get everything they need in this small paradise: the Alpine mountains, slopes of different difficulty levels, excellent hotels – from luxurious to budget ones, various winter activities. The service level in Slovenia is the same as in neighboring Italy and Austria, while the prices are significantly lower. And starting from late 2016, the winter holidays in this European country will be even more accessible for Ukrainians – all thanks to the new charter flight launched by the tour operator ХКС-Group together with Bravo Airways.