Drink and drug driving is an extremely dangerous offence that can carry a hefty penalty for offenders. But research shows that some countries are stricter than others when it comes to blood alcohol content (BAC) limits. Though that’s not surprising, with countries such as South Africa seeing over half (58%) of its road deaths attributed to alcohol use.

And with worldwide travel back on the cards following the easing of most COVID-19 restrictions, we all must be aware of the differences in these laws, as well as the consequences if they’re broken. That’s why Confused.com has analysed the drink-driving laws across the world.

Thanks to the European Union, many member states have harmonised their laws to be in keeping with one another. However, some countries have adopted blood alcohol content (BAC) limits that are different from the most common 0.05%, so we wanted to take a look at the countries with the harshest drink-driving penalties in Europe.

Using an index ranking to score the BAC limits, maximum fines, maximum driving suspension limit and maximum prison sentence of each country for drink drivers, our research revealed Luxembourg was the European country with the strictest laws, scoring 37/80.

Luxembourg’s high score was thanks to the country having the highest maximum driving suspension, with a possible 15 years on the cards for repeat offenders.

Our research revealed that seven countries across Europe impose a BAC limit of 0.03% or less, including the Czech Republic, Slovakia and Hungary, which are the only countries in Europe in the study with a zero-tolerance limit. Thanks to their zero-tolerance approach, all countries made the top 10.

Those caught over the limit in Norway could face a fine equivalent to 1.5 months of their salary, which averages to be around NK 90,255 (£5,138). Despite this high fine, however, Norway managed to place only 16th on our list, with a score of 15/80.

Meanwhile, the UK came 23rd out of the 25 European countries analysed. This is largely in part to the UK having one of the highest BAC limits across Europe at 0.08%. However, the UK also has the highest maximum fine for repeat offenders – with an unlimited fixture.

This could explain why drink-driving offences are relatively lower in the UK than in other countries, with just 13% of road traffic deaths involving alcohol. That compares to the average of 30% in most other developed countries, including France and America.

Drink-driving laws around the rest of the world

With many countries beyond Europe opting for more varied limits on blood-alcohol content limits, we thought it would be interesting to explore some of the countries across the world where offenders may face harsher penalties.

Looking at 22 countries across the world, our research revealed Uzbekistan as the country with the harshest drink-driving penalties, scoring 61/80 on the index.

Uzbekistan not only has a zero-tolerance limit for drink drivers, but its drink-driving fines are equivalent to 25 times their people’s monthly salary – the highest out of all the countries analysed.

Where penalty data was available, our research found five other countries with a zero-tolerance policy including Bangladesh, the United Arab Emirates (UAE) and Vietnam.

Placing tenth on our list was Canada, a country that has one of the highest limits for BAC at 0.08%. The country did however also have the highest maximum prison sentence for repeat offenders at 10 years, suggesting that they are somewhat understanding until the law is broken.

However, Canada often has different laws across its provinces for driving suspensions. It doesn’t tend to have high rates of drink-driving offences, with alcohol-related deaths dropping by 50% in the last decade. 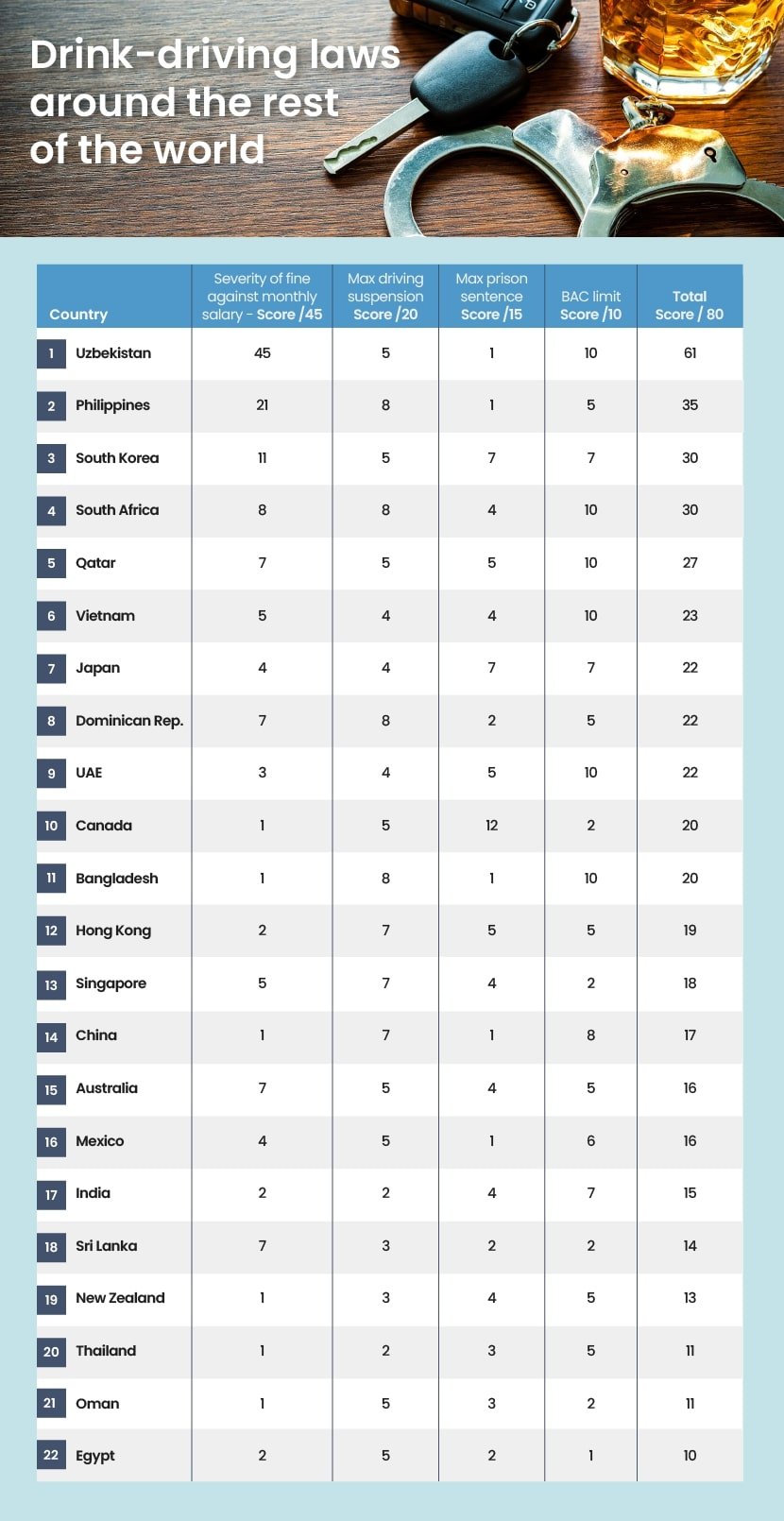 DUI’s in the USA: which state has the strictest laws?

With 50 states in the USA, it’s no surprise that laws surrounding drink-driving, or DUI’s (driving under the influence) differ from state to state. While every state adopts the standard 0.08% BAC limit, many states impose even harsher sentences when people are caught with more alcohol in their system.

Our research revealed that nearly half (44%) of all states opted for an enhanced BAC limit of 0.15%, including many of the western states including Virginia, Pennsylvania and New York.

Five states had the highest limit of 0.2% including Tennessee, Idaho and Florida. In some of these states, this could land you with an enhanced fine, and even jail time, for a first time offence.

Meanwhile, Mississippi is the only state to not have enhanced penalties for drivers who are found with a higher limit of alcohol in their system. Laws in Mississippi have only tightened in recent years, with repeat offenders in Mississippi facing fines of up to $5,000 and having their vehicle seized.

The USA is well-known for having one of the highest drinking age limits in the world at 21, and this strict tolerance is also shown within their drink-driving laws, where anyone under 21 is subjected to a near zero-tolerance (0.02%) BAC limit when driving. 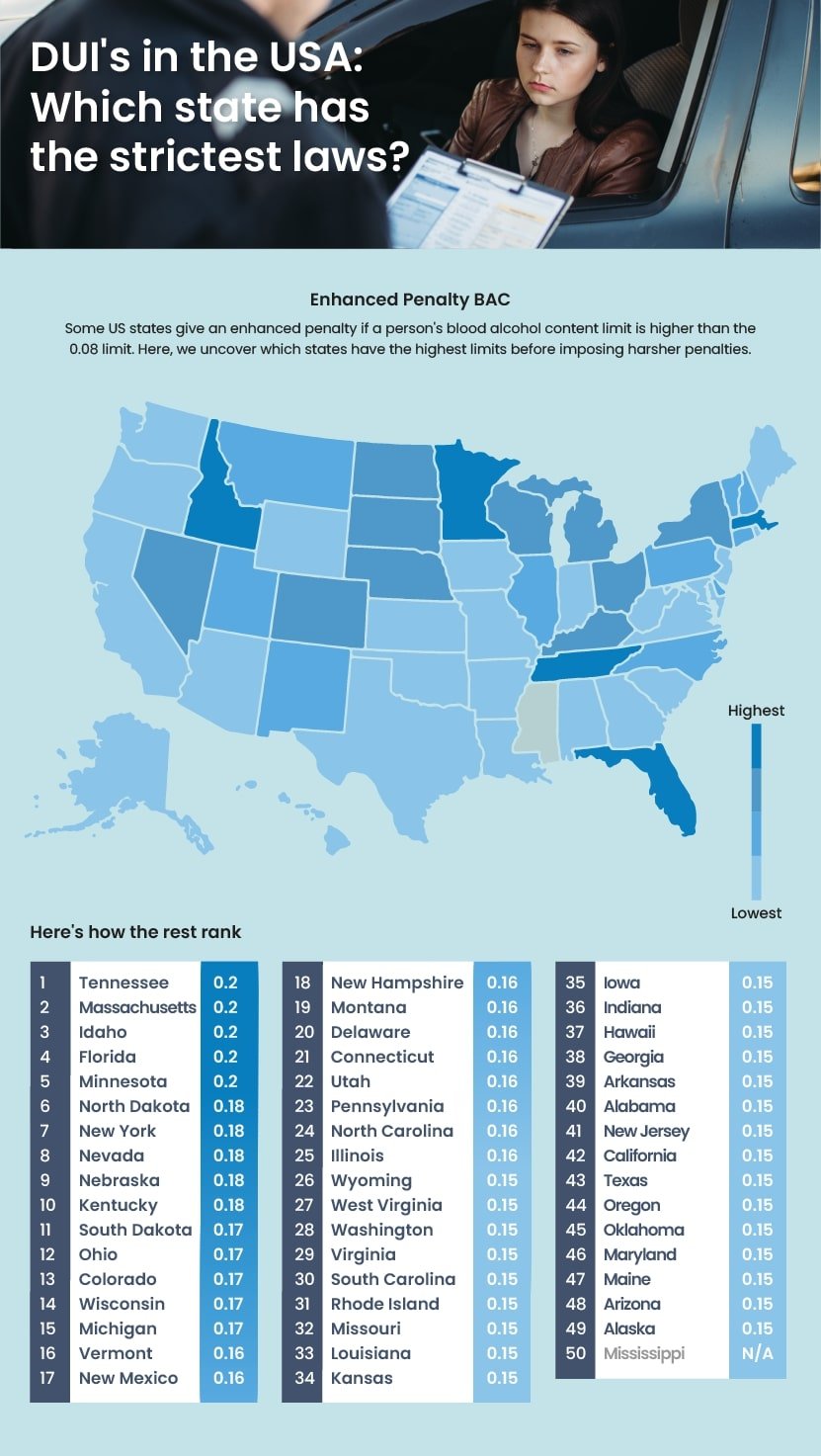