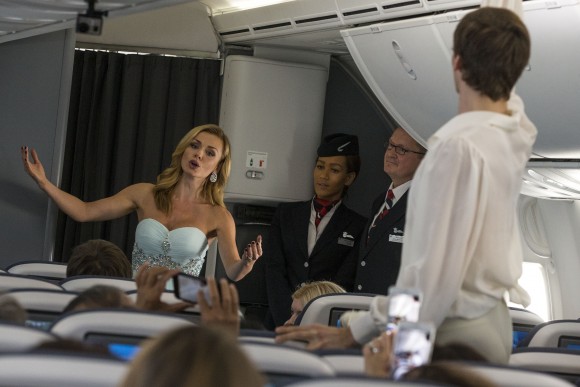 Dancers from the internationally renowned Bolshoi Ballet and classical superstar Katherine Jenkins staged the world’s first ballet and musical performance in the air, to celebrate the launch of British Airways’ Dreamliner flights from London Heathrow to Moscow, Russia.

Lucky passengers on the inaugural flight of the Boeing 787-9 Dreamliner were taken to new heights with an incredible, surprise performance by Artemy Belyakov and Olga Marchenkova, stars from the legendary Bolshoi Theatre of Russia.

The dancers were accompanied by one of Britain’s favourite singers, Welsh Mezzo soprano Katherine Jenkins OBE, who gave a spine-tingling rendition of Somewhere Over the Rainbow.

Artemy Belyakov, the leading soloist from the Bolshoi Theatre, said: “We are honoured to be a part of this very first flight to Moscow and unite the heart and soul of classical Russian culture with an iconic British brand such as British Airways in this performance on board.  We loved the creative challenge of using the new Boeing 787-9 Dreamliner as our stage, and the experience was as memorable for us as it was for the audience”.

“Being a part of the oldest ballet theatre in the world, dancers from the Bolshoi Ballet have performed in some incredible places over the past 240 years – but ballet in the sky takes it to a whole new level! I enjoyed that experience!” – adds Olga Marchenkova, ballet dancer from The Bolshoi.

Speaking after the performance, Katherine Jenkins said: “Such fun to be invited to perform for the first time at 41,000 feet ‘Somewhere over the Rainbow’ en route to Moscow on board BA’s new Dreamliner! I have always been excited to sing in Russia due to its deep and rich history in the arts, and performing alongside dancers from the Bolshoi Ballet was a very special experience for me.”

Dancers from The Bolshoi Ballet and Katherine Jenkins were joined by Galina Karzova, British Airways’ Commercial Manager for Russia. Galina Karzova commented: “This launch is a huge step for British Airways, and reinforces our continued commitment to our London to Moscow service.  The introduction of the new First cabin on the route means customers can travel in unrivalled luxury and style.”

The new First cabin is a first for British Airways’ B787 fleet, with just eight seats in comparison to the 14 seats available on other British Airways long-haul aircraft, offering customers even greater exclusivity and privacy.

British Airways’ first 787-9s started flying in October 2015.  There are currently 14 787-9s in service, on routes between London Heathrow and Austin, Boston, San Jose (California), Shanghai and Narita (Japan), amongst others.