In August 2017 Wizz Air will open two new routes from the airport Kiev Zhulyany to Copenhagen (Denmark) and Nuremberg (Germany). Furthermore, Wizz Air will supply a second Airbus A320 to the base in Kiev. 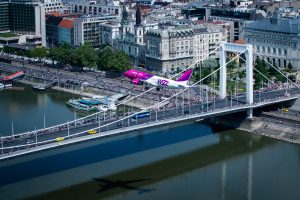 In addition, the airline will increase the frequency of flights to Budapest (to daily), Dortmund, Munich and Bratislava (to four per week) and to Cologne and Hamburg (to three per week) from August 2017.