Venice locals have vented their frustration against tourists in Italy’s famous canal city, as mayor Luigi Brugnaro pledges to come down hard on unruly visitors. Flyers have appeared across the city, which attracts some 20 million people a year, over the last few days, telling tourists exactly what some locals think about their presence. 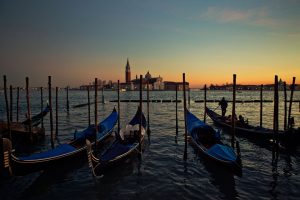 “Tourists go away!!! You are destroying this area!” read the sign in English. One was even posted on the wall of one of Venice’s oldest churches, the San Giovanni in Bragora.

Another, with the image of a pig throwing waste on the ground, was pinned to a rubbish bin along the Riva Degli Schiavoni, an overcrowded promenade by the waterfront at St Mark’s Basin.

It’s unclear who the culprits are but Venice residents have long been frustrated by tourists clogging their city.
The issue was exacerbated last week when a reportedly drunk yacht worker, from New Zealand, jumped off the Rialto Bridge and smashed into a passing water taxi.

The 49-year-old, who was hospitalized with severe injuries, now faces charges of endangering public transport.

The city’s long-suffering mayor, Luigi Brugnaro, took to Twitter to vent his despair, threatening unruly sorts with jail. Brugnaro has made it his mission to crackdown on the industry that helps fill the canal city’s coffers ever since he was elected in June 2015 .

“I insist on introducing special powers to the city to uphold public order. Pickpockets, vandals, drunks! A night in the cells,” he wrote.

But the threat didn’t deter six youths from attempting to take an afternoon dip in the Grand Canal on Wednesday – only to be shooed away by an angry local. Venice locals have vented their frustration against tourists in Italy’s famous canal city, as mayor Luigi Brugnaro pledges to come down hard on unruly visitors.

“You’re not allowed to dive into the canals!” the local shouted, first in English and then in German, Corriere del Veneto reported. “Venice is not Disneyland”.

The Venetian recorded the scene on a smartphone, with the clip quickly doing the rounds on social media, attracting over 100,000 views. The city’s deputy mayor, Luciana Colle, has given a more diplomatic response to the situation, arguing that the reaction is perhaps exaggerated while reminding people that tourism is the main contribution to Venice’s economy.

“But people must be educated,” she added. “The city needs more respect, but so do tourists.”