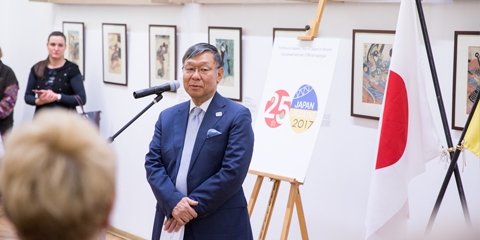 The year of 2017 has been declared as the Year of Japan in Ukraine. In light of this, on January 20th, the National Art Museum of Ukraine held the first opening of the exhibition on exquisite Japanese prints in the ukiyo-e style called The World of Kabuki. In cooperation with the Japanese Embassy in Ukraine, the exhibition represented one of the extraordinary phenomena of the world of art, which influenced the formation not only of the Japanese culture but also the history the entire world culture.

The IKIGAI Restaurant as a restaurant of exclusive Japanese cuisine could not ignore this event and had an honor to be its gastronomic partner. Especially for the guests of the exhibition, Chef Vadym Stepanenko prepared a set of rolls in the national colors of Japan and Ukraine. In addition to the aesthetic pleasure from the bright palette of colors and works of authors, the guests also had an opportunity to receive the gastronomic pleasure from traditional Japanese delicacies with a vivid and unforgettable taste palette.