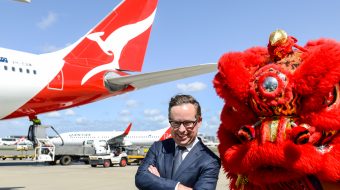 Qantas will launch daily flights between Sydney and Beijing from 25 January 2017, with services to the Chinese capital the next step in the Group’s strategy to tap into the exceptional growth of the Australia-China travel market.

The new service will operate into Beijing Capital International Airport, using an Airbus A330-200 aircraft, with return flights timed to connect with Qantas’ extensive domestic and trans-Tasman network.  It marks Qantas’ return to the route for the first time since 2009 and makes Beijing the national carrier’s third destination in Greater China, including its existing daily return services to Shanghai and 28 return services a week to Hong Kong.

The new Beijing-Sydney service is part of the expansion of Qantas’ joint venture partnership with China Eastern which will also see three international codeshare routes between Australia and China being added under their strengthened agreement: Sydney-Hangzhou, Sydney-Kunming and Brisbane-Shanghai. China Eastern will codeshare on Qantas’ new Beijing service.

Qantas Group Chief Executive Alan Joyce said the new route – which equated to an additional 3,300 seats a week between Australia and China – would help the airline take advantage of surging travel demand.

“The tourism industry in Australia is very excited about what the Chinese market will deliver over the next few years, especially given it’s already become our second biggest source of visitors after New Zealand,” said Mr Joyce.

“Australia is now at the top of the wish list for Chinese travellers thinking about where they want to go next.  There are 21 million people in Beijing alone and from the start of next year they will be just one Qantas flight away. The potential is tremendous.

“We’re seeing strong loads on our existing Shanghai and Hong Kong services, and on this new Beijing route we’ll have the advantage of China Eastern marketing the Qantas flight as part of their own network.

“We’ll be ramping up the work we’re already doing with the state tourism bodies and Tourism Australia on marketing campaigns in China to make sure we make the most of this potential.   Our pitch is that if you want to experience the best of Australia, your trip should start with the national carrier.

“The business travel market is another key focus for this route, particularly off the back of the free trade agreement with China, which is increasing the amount of freight we’re carrying,” added Mr Joyce.

This growth is part of the Qantas Group’s broader focus on Asia, with around 50 per cent of Qantas’ and Jetstar’s international capacity now dedicated to the region, compared with 30 per cent 10 years ago.   Over the past 12 months, Qantas has added flights to Hong Kong, Singapore, Japan, the Philippines and Indonesia to meet growing demand in the region.