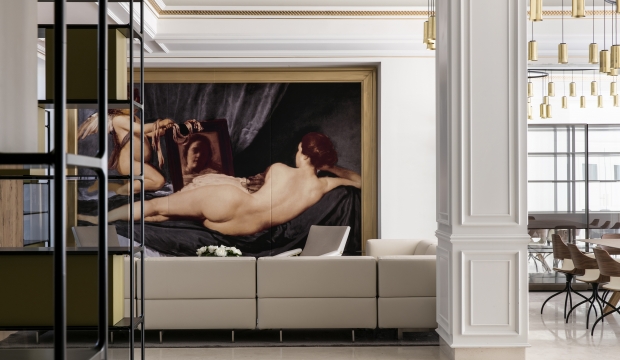 The Gran Meliá Palacio de los Duques hotel was presented on December 1st. Located in the heart of Madrid’s artistic and historical centre, next to the Oriente Palace and Royal Theatre, it has already been named one of the Leading Hotels of the World and is set to become a benchmark for lovers of design, art, Interior design and architecture. 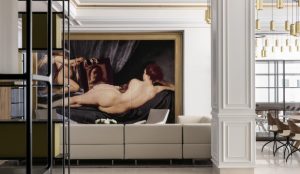 As Gabriel Escarrer Juliá, the founder and Chairman of Meliá Hotels International, has always said, “great hotels make great cities”, and this is undoubtedly a great hotel. Endorsed by the luxury Gran Meliá brand, this five-star hotel is the result of the thorough restoration of the well-known Hotel Ambassador, located in what was once the Santo Domingo Convent and the Palace of the Dukes of Granada of Ega y Villahermosa – art collectors and members of the Madrid’s intelligentsia of the mid-nineteenth century, whose passion for the art of Velázquez led them to donate one of his works, a portrait of Don Diego del Corral y Arellano, to the Prado Museum.

The hotel is now a landmark on the so-called “Velazquez tour”, a powerful attraction for the growing segment of art and architecture tourism. This tour around the narrow streets and charming corners of the “Madrid of the Austrias”, includes leisure areas for both the royal family and their subjects, such as the Real Sitio del Pardo or the Retiro Park, and also all of the classic areas and attractions in Madrid where Diego Velázquez, the “court painter” for Felipe IV, lived from his arrival in Madrid in 1623 until his death in 1660: the Plaza Mayor, where he lived for the first few years, the Spanish Theatre, the Prado Museum, and the Royal Palace (called the Royal Alcázar until a fire in 1723), in whose east wing the brilliant painter had his studio.

The architect álvaro Sans was in charge of the hotel renovation, and he has managed to create a contemporary building without losing any of its neo-Renaissance spirit. The architect Adriana Sans led the interior design project, achieving an exceptional theme based around the work of Diego Velázquez, including well-known classics such as Las Meninas (The Ladies-in-Waiting), Las Hilanderas (The Spinners) or Venus del Espejo (Rokeby Venus), among others, together with the avant-garde quality of international brands such as Vitra, Moroso, Minotti, Flos or B&B Collection. Past and present, sharing the same space.

The former palace is a neo-renaissance building, clearly inspired by the Palazzo della Cancelleria in Rome, now restored to its original splendour after a number of previous successful and less successful reforms. Due to its heritage value, this majestic building conserves some of its original nineteenth century elements such as the Elizabethan facade, the spectacular wrought iron and wood central staircase or the glass-vaulted cloister which now serves as the hotel lobby.

Another of its attractions is the Historic Garden and fountain, which thanks to exhaustive archaeology and recovery work now conserves its original structure, as well as the ancient palace stables, currently home to the Dos Cielos restaurant run by chefs Javier and Sergio Torres.

A benchmark for luxury “bleisure” hotels, the Gran Meliá Palacio de los Duques has three different dining spaces, each with its own personality and character. The Coroa Restaurant features a spectacular Portoro marble bar, and combines exquisite decoration and ambience with tables of different heights. The Montmartre 1889 pays the greatest attention to detail and has a surprise in every corner: lithographs, velvet armchairs and aromatic plants form part of a coherent and well-designed decoration which really makes a difference.

Gran Meliá Palacio de los Duques thus becomes the latest hotel to be added to the renewed Gran Meliá luxury brand, in which Spanish passion merges with the most exquisite attention to detail. Gran Meliá thus takes up a new residence in Madrid (where it is already present with the magnificent Gran Meliá Fénix, located in the Plaza de Colón in the heart of the city) with the vocation to become the leading luxury hotel in the Spanish capital.