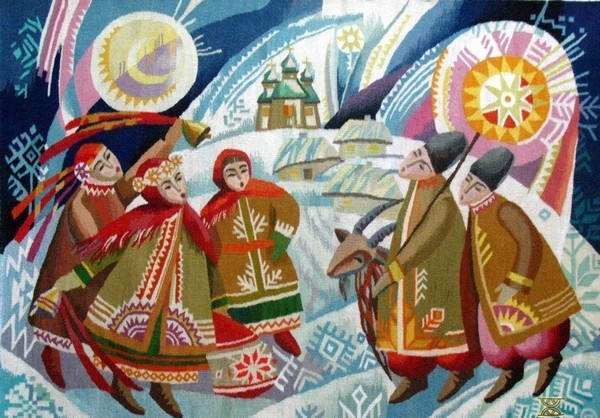 Christmas is a wonderful holiday, it’s a feast of Christ’s birth and it’s celebrated on the eve of 7th of January. In the mid-4th century it was established by the Roman Catholic church as a separate feast and was celebrated on 25 December according to the Julian calendar.

In the 10th century with the introduction of the Christianity into Rus it was fused with the local pagan celebrations of the sun’s return or the commencement of the agricultural year. In some areas was used the pre-Christian name of the feast — Koliada.

The Christmas Eve is considered as the most interesting part of Christmas as it has ritual and magic acts aimed at ensuring a good harvest and a life of plenty. Caroling is a characteristic feature of the feast, it expresses respect for the master of the house and his children, and sometimes it’s accompanied by a puppet theatre (vertep). The religious festival lasts three days and involves Christmas liturgies, carolling, visiting and entertaining relatives and acquaintances. The Christmas tree was adopted from Western Europe, but today it’s the element of the New Year celebration in Ukraine.

The «holy supper» on Christmas Eve is a meal of 12 ritual meatless and milkless dishes. The order of the dishes and dishes themselves aren’t uniform everywhere. In the Hutsul region, for example, the dishes were served in the following order: beans, fish, boiled potato, dumplings, cabbage rolls, kutya, potatoes mashed with garlic, stewed fruit, plums with beans and some other dishes.

Christmas is the holiday when all members of the family gather together. This is the holiday of joy. Comparatively with Great Britain and some other countries, Ukrainian people don’t exchange presents on this holiday. For many years only religious people observed this holiday, but today it’s an official state holiday. Children like to have fun on this holiday, they go from door to door, sing carols and people give sweets to them. As it was already mentioned, «Kutya» is a traditional Ukrainian Christmas dish. It’s cooked by mothers and godchildren take it to their godparents. Although this holiday appeared long ago but nowadays many people still like to go church and listen to Christmas sermons.