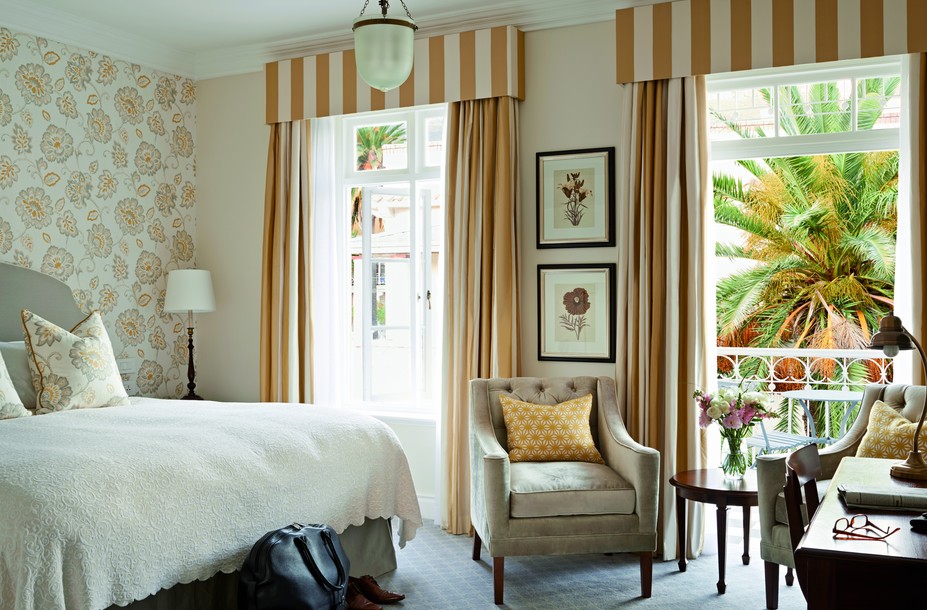 One of the world’s iconic hotels, Cape Town’s Belmond Mount Nelson Hotel, recently unveiled its 48 new guestrooms and suites. The renovation of the East Wing of the hotel was led by London-based interior designer Inge Moore, who also was responsible for the award-winning redesign of Belmond’s Eagle Island Lodge in Botswana. The design intent was to recreate the original spirt of the hotel, which opened in 1899, whilst updating it in such a way as to engage today’s connoisseur traveller and lovers of exceptional hotels.

“Belmond Mount Nelson is a hotel that epitomises the inheritance and soul of its location,’ says Inge ‘and therefore it is the heritage of Cape Town that influenced the foundation of my thinking.” After seafarers from around the globe had discovered the Cape and had made it their home, they embraced what the Cape had to offer, and combined this with what they had brought from their previous lives. Therefore, local materials such as rustic timbers, beads and clay were brought together with crystal and fine bone china to create a new Cape vernacular. It was this mixture of the refined and the artisanal that the designers have translated into the refurbished guestrooms.

New oak flooring has been introduced into some of the suites, scattered with rugs crafted by Cape carpet weavers. Natural leather and linen abound, and beautifully beaded ornamental mirrors reflect the sparkle of crystal and the sunshine dancing through the room. Drapery is soft and calming in tone, locally embroidered with a flower motif.

In each room, the bed is the centrepiece, focused on the view outside. At the foot of each bed there is a local ‘riempie bank’ – the bench introduced to the Cape by the early settlers. Each room has a “chair to dream in”, a deeply comfortable armchair placed at a vantage point to soak up the panorama and allow the guest a place to slow down and feel what is important to them, be it to think, to read or just to be.

Artwork is a major part of the experience, and the rooms have been accessorised with collections of objects and over-scaled paintings, curated by art consultant Janine Bath in collaboration with Inge. All of the art is by local artists, some is contemporary and some of Cape landscapes. “I think that art in hotels is either just decorative or it has real meaning – there is nothing in-between,” says Inge. “When we have the opportunity to develop art with local artists, it creates the meaning of the project and sets the tone. For Belmond Mount Nelson, I wanted to celebrate the amazing Cape and bring this into the hotel.” The new artworks have joined many fine existing pieces which have been re-framed in a contemporary manner, complementing the traditionally classic images of landscapes and flowers.

Guestroom corridors have been transformed with new art, offering a journey through the work of some of Cape Town’s most interesting established and budding artists, combined with the existing collection. The introduction of additional chandeliers and crystal wall lights along the corridors provides new sparkle, more light, and the tones of paint replicate heritage colours favoured in domestic settings in the late 19th century. A new sisal-inspired carpet laid along the walkways hints at the hard-wearing floor coverings of the turn of the century.

Most importantly, the redesigned rooms and corridors are comfortably residential in feel. Says General Manager Xavier Lablaude: “For the many loyal guests who return year-after-year, the ambience of the rooms will be reassuringly familiar while there will be much to discover that is new and enchanting.”