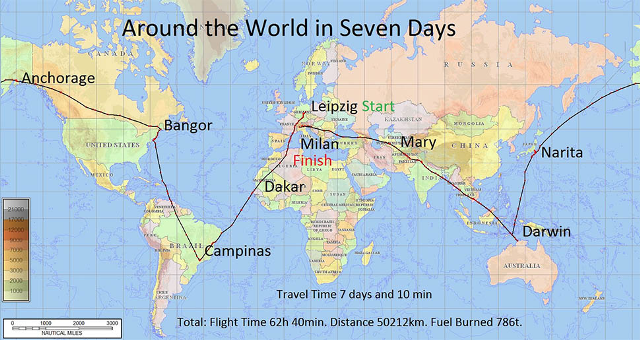 An Antonov Airlines’ AN−124−100 Ruslan aircraft flew around the globe one and a half times, performing a series of commercial flights

One of Antonov Airlines’ AN−124−100 Ruslan aircraft flew from Mary International Airport, Turkmenistan to Helsinki, Finland on Tuesday 18th September 2017, where it took on board commercial cargo consisting of industrial heat exchangers, weighing a total 54 tonnes.

The AN−124−100 Ruslan aircraft then flew to Bangor, Maine, USA to transport water purification plants, weighing a total of 58 tonnes, to Darwin, Australia. Interim landings were performed in Anchorage, Alaska, USA and Narita, Japan.

From Australia, the AN−124−100 returned to the city of Mary in Turkmenistan, before flying to Milan, Italy, where it took a 62−tonne cargo on board to deliver it to Rio de Janeiro, Brazil.