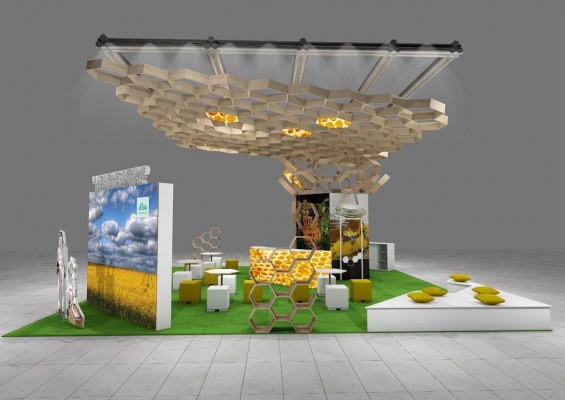 Starting the year of traveling in January has already become a tradition. This year, the international tourism, travel and active leisure exhibition “Adventur” marks its fifth anniversary. “The trends of food tourism have been growing throughout the world and also in Lithuania. Culinary experience for travellers has increasingly become the aim of traveling. However, tasting is not only flavours of local dishes; we also taste using ears, eyes and the heart. Impressions collected this way stir up the inner and outer limits of our personality, teach us openness” – Jurgita Kazlauskienė, Head of the State Department of Tourism under the Ministry of Economy, explained the invitation to taste the world and Lithuania. The exhibition will take place in Vilnius, in the exhibition and congress centre Litexpo on January 20-22.

What is the taste of Lithuania?

A huge beehive with a wooden honeycomb going up to the ceiling, honey colours and images of Lithuanian grasslands – the Department of Tourism will invite guests to this “sweet” exhibition booth located in Hall 3.

“When we were asked what the taste of Lithuania really is, we thought that it should be cucumbers with honey. Not only because this is the oldest Lithuanian dessert, which is said to have been served on the table of King Mindaugas, but also because of the fact that it is very natural, encompasses the summer, bees buzzing in meadows and incantation of hives. The symbol of fresh cucumbers and honey straight from the hives is also very close to our new tourism trademark of the country, which proclaims that the beauty lies in real things – “Lithuania. Real is Beautiful“, – J. Kazlauskienė intrigued.

According to her, our country has more than 3 000 authentic dish recipes. The good news is that antique dishes revived and are increasingly being served nowadays: “Traveling throughout regions of Lithuania and tasting dishes typical of those regions only has become a true discovery for many. “Šišioniškių kafija” (coffee), “Tija” (tea) or “Vofeliai” (waffles) must be tasted in the Pomeranian region, buckwheat buns baked on cabbage leaves – in Dzūkija and “Cibulynė” (onion soup) with herring – in Žemaitija. And did you know that our pink cold beet soup was selected the most aesthetic in the world? Moreover, many of us have heard about the route going through Lithuania called the Beer Road, while this year the Milk Road was introduced. Traveling this road gives an opportunity not only to see farms where cheese is pressed, or yogurt or ice cream is made, but also to chill in a sauna with whey ice cubes or to dip in a milk bath. This is another proof of the fact that food tourism is not only about direct tasting in our country”.

The booth of the Department of Tourism will be equipped with a mobile kitchen, where famous culinary enthusiasts, such as Alfas Ivanauskas, Beata Nicholson, Vytaras Radzevičius and Bilas Šapiro, will tell delicious stories and treat guests to meals produced right here.

The “Urban Forum 2017” to be held on the 20th of January will continue the theme of food tourism. It promises inspiring topics. For example, can beets become the hit of Lithuania?

Discover Lithuania – from icebreakers to mounds

The organizers of the exhibition have no doubt that the new space in Hall 4 “Authentic Lithuania” should attract the most visitors. This is where they will be able to go on a food trip through Lithuania, taste national heritage dishes and beverages.

The Head of the State Department of Tourism believes that the Lithuanians have already discovered the world, thus it is high time to discover Lithuania. “Traveling around the country has become fashionable with the sharing of interesting places, discovered attractions, new tastes and experiences on social networks becoming increasingly popular. Local tourism is growing each year, while local tourists account for as much as a half of the Lithuanian tourism market”.

The popularity of the local tourism encourages the emergence of new routes and new tourism products – sightseeing trails going through tree crowns and swamps, schools of nature where owls and bats can be watched at night have become very popular. The culture of estates has revived, with night tours held in Karpiai Mansion, traditions and rituals of biodynamic farm previously unheard of in Lithuania portrayed in the Ilzenberg Mansion or an opportunity to meet in Pakruojis estate not only the landlord himself, but also a parfumerie, a brewer Žaldokas and a beekeper.

All of them and much more will be available in Hall 3 of the “Adventur” exhibition, which invites to explore Lithuania. Here exhibition organizers also beat records – more than 50 cities and towns of the country are already setting up booths for this hall. The project manager Dovilė Vertelytė-Saldukienė revealed that Kaunas has prepared a special performance. But Vilnius, having chosen a non-traditional exclusive space in the exhibition, does not give in, promising modern interactive entertainments to travellers.

Mystery “Smilgininkai” will spread in halls of Litexpo a message about Klaipėda, the Lithuanian Capital of Culture 2017 – the never freezing port of culture open to creative initiatives and curious tourists all year long. “The cultural community of the port city will invite residents of Klaipėda and city guests not only to a variety of cultural events and projects intended for different groups of the society, but also to new or renovated cultural spaces of the city – the reconstructed Sea Museum or the creative platform “Menų Zona” (Art Zone) in the World War II museum castle “39-45”. “Presenting its programme of cultural events “Neužšąlantis kultūros uostas” (The Never Freezing Port of Culture), Klaipėda invites the community to become true icebreakers with their creative initiatives breaking the ice of indifference, scepticism, mistrust and introversion, and encourages to rediscover the culture. Especially in light of the fact that the city is setting an ambitious goal – to become the European Capital of Culture in 2022”, – told Vytautas Grubliauskas, the Mayor of Klaipėda, about the plans of the city.

Another point of focus of “Adventur” is Lithuanian mounds. “This year was proclaimed the Year of Mounds, thus we invited cities and towns to introduce unique objects of nature in their territories. Not only they are points of attraction, but also the value reinforcing the nation’s identity, the symbol of the early state of Lithuania, and the cultural heritage of the entire Europe” – the project manager Dovilė Vertelytė-Saldukienė said assured.

Georgia is a guest in the exhibition

This year “Adventur” exhibition, which has become a tradition by now, calculates a record high number of participants. Almost 300 participants will present themselves in the three halls of the exhibition and congress center Litexpo. “Newcomers, who have previously simply explored the exhibition and calculated the benefit, will settle along with those, who participate in the exhibition for the fifth year”- said the “Adventur” project manager Dovilė Vertelytė-Saldukienė. – We are particularly excited to have organizers of exclusive tours, who will offer to fussy travellers original ways of traveling, unique countries, not yet discovered corners of the world”.

One of such corners is Georgia fostering warm feelings towards Lithuania. This year it is a guest country in “Adventur”, which will present to the Lithuanians the extraordinary beauty, resorts and specialty kitchen of the country.

As usual, the fifth hall of the exhibition is designated for tour operators. “The theme of the exhibition “Taste the World” will be directly reflected here as well”- said the project manager Dovilė Vertelytė-Saldukienė. – Tourism agencies not only will offer special travel prices, but will also hold meetings with famous travellers and food degustations”.

On Friday, the 20th of January, the exhibition will be open to visitors longer – till 8.00 p.m. “So that everyone has enough time not only to taste, but also to see city presentations, have fun, sing together with exhibition participants and dance. DJ Saga is preparing a special mix of ethnic and modern music”- the project manager Dovilė Vertelytė-Saldukienė told about things that visitors can expect.

“Adventur” is the only and the largest tourism exhibition in Lithuania. Here, one can spur on travel ideas for a year ahead, – the Head of the State Department of Tourism Jurgita Kazlauskienė explained the success and popularity of the exhibition. – Tourism information centres creatively present themselves, while the exhibition itself expires to travel like nothing else on earth.