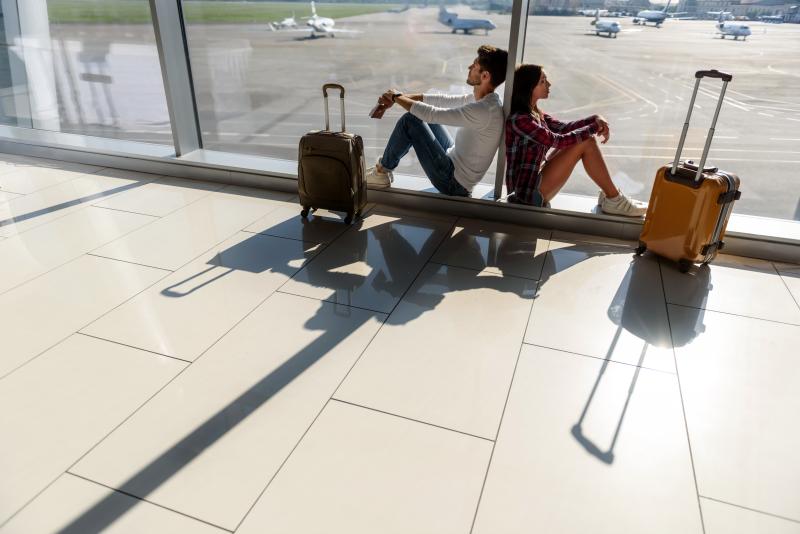 From packing too much to leaving too late: here are 10 topics that could cause a serious holiday bust-up.

1. When to leave for the airport

Punctuality is key when catching a flight – or is it? The sensible one in the relationship will insist on getting there at least three hours early in case there are any hold-ups on the road. The laid-back one on the other hand hates wasting time queuing. He/she will hit the snooze button and try to delay matters to ensure you leave the house as late as possible. But don’t worry – to minimise pre-flight stress, we’ve got tips on getting through the airport as quickly as possible.

“This is way over the limit, it must weigh at least 30kg!” Packing can be problematic – do you really need eight pairs of shoes? Do they really need to take ten novels with them? Luckily, we’ve got some top packing tips to try and minimise the tension.

If the Sat Nav fails, you could end up getting lost in more ways than one. Ask for directions, or risk finding your way into an argument.

4. Who has the passports?

You’ve made it to the airport in plenty of time, but there’s one problem – the passports. Nothing causes a short sharp squabble quite as quickly as the thought of someone accidentally leaving them at home. You bicker over who had them last – shouting out “you had them!” while frantically searching your pockets and bags. When one of you inevitably finds them in your coat pocket, there’s a sheepish silence followed by: “I told you so.”

5. Staring at other people on the beach

If there’s one thing that’s going to cause trouble in paradise, it’s ogling other people on the beach. And yes, you can always tell – even if you’re wearing sunglasses.

You may want to get as brown as possible, but it’s not big and it’s not clever to skip the suncream. It’ll ruin both people’s holidays when you have to spend the next two days in bed doing the distressed red lobster routine – slapping on the aloe vera and avoiding the sun. If you do become a little red, don’t fear: consult our sunburn SOS guide.

7. One of you wants to stay up drinking and sleep it off the next day

A couple of casual cocktails is fine, but when it’s an all-inclusive holiday and you’re the one who wants to stay up until 3am lining up the shots and necking anything the barman concocts, your partner isn’t going to be impressed. The next day you’ll probably want to sleep off your hangover. If your other half wants to get up early to have an active/cultural day – this could cause some serious friction.

8. Flirting with the waiter/waitress

You were hoping to enjoy a romantic meal with the love of your life, but there’s one issue – the waiter/waitress is flirting. It’s a common cause of arguments on holidays, and can seriously make you rethink ordering dessert.

Picture the scene – there’s an all-you-can-eat buffet, it’s been out all day and the food isn’t exactly looking fresh. That old sardine looks familiar – he was in exactly the same place yesterday. When one of you is sensible about it, but the other ignores their advice and tucks in, problems could soon arise. When the latter is struck down with terrible food poisoning the next day, they’ll be looking for sympathy…

10. Parking at the airport

Congratulations, you’ve survived your holiday, you’ve got all your luggage and it’s time to head home. One problem – the car! Where is it? B1? C1? E1? You remember it was row 22 but seem to have forgotten the other details. At the time it was crystal clear and you remember telling your other half to make a note of it. When one of you finally finds the note on their phone, you take a sigh of relief. Hold on – who’s got the car keys?