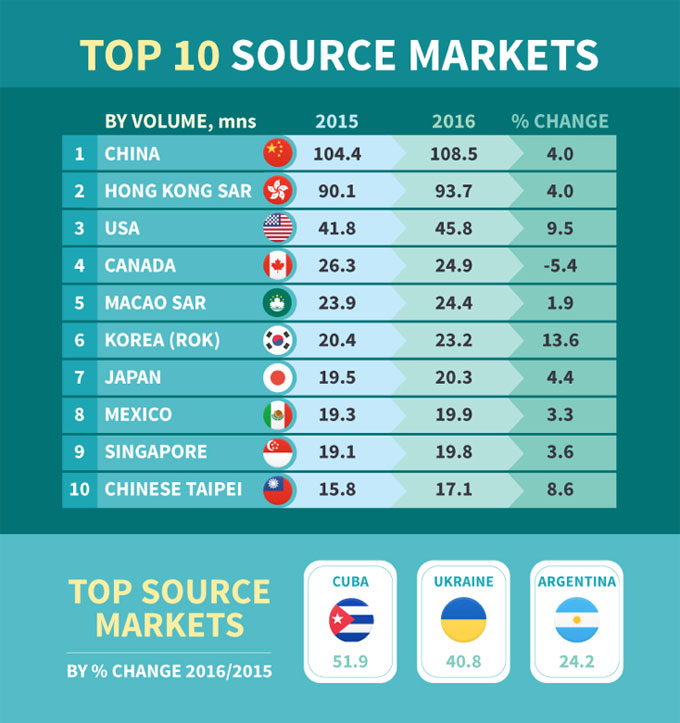 Despite the significant challenges being faced by Turkey’s tourism sector the annual net increase in arrivals into the Asia Pacific region was still strong, adding close to 18 million additional arrivals to its total foreign inbound count year-on-year.

Seventeen of those destinations had double-digit growth rates ranging from more than 30 percent for Nepal and Korea (ROK) and over 20 percent for each of Mongolia, Japan and Vietnam. Growth was once again uneven with seven Asia Pacific reporting contractions in foreign arrivals in 2016 compared to 2015.

The strongest destination sub-regions for annual growth between 2015 and 2016 were South America with an annual increase of over 13 percent, Oceania with a gain of more than 11 percent and South Asia with close to 10 percent growth.

Intra-regional travel flows were extremely strong for Asia and the Americas with 94 percent and 78 percent respectively of their inbound volumes arising from within the same region. The Pacific was the only destination region to see the majority of its arrivals come from outside that region; more than 52 percent of foreign arrivals into the Pacific in 2016 came from Asia as opposed to the Pacific which generated 32 percent of the inbound arrivals to that region.

The USA, Canada and Mexico also rated within the top ten generators of foreign arrivals in 2016, producing 45.8 million, 24.9 million and 20.3 million arrivals respectively into Asia Pacific in that year.

Singapore was the only Southeast Asian origin market within the top ten listing, generating close to 19.9 million arrivals for the year.

There were some very strong annual growth increases from a number of origin markets such as Cuba (+52%), Ukraine (+41%) and Argentina (+24%).

Similarly for a number of origin sub-regions, each of which added significant incremental volumes to the absolute count into Asia Pacific destination sub-regions between 2015 and 2016. Northeast Asia topped that list with an additional eight million arrivals within its own sub-region, and 4.4 million additional arrivals into Southeast Asia.