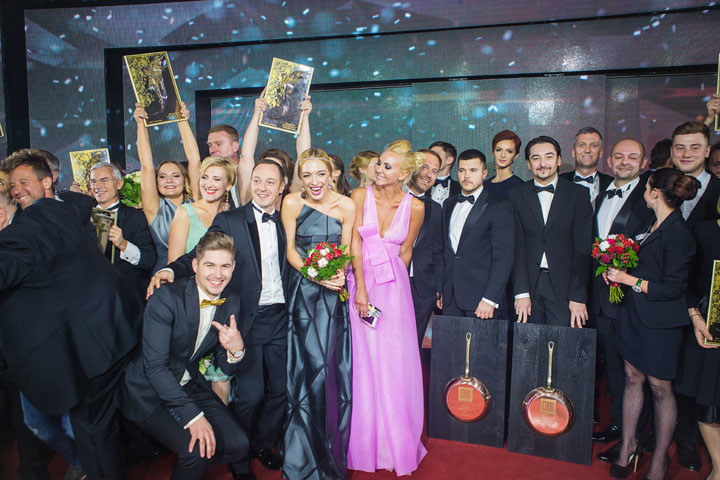 On December 07, 2015 the third awards ceremony for the best Ukrainian restaurants according to National SALT® Restaurant Awards 2015 was held at InterContinental Kyiv.

The main event of the year for the professional restaurant community of the country was traditionally held in the black tie format and was attended by the leading Ukrainian restaurateurs and famous world experts.

At the SALT® Awards the best Ukrainian restaurants 2015 were named in 11 nominations:

This year the geography of the National SALT® Restaurant Awards covered the entire territory of Ukraine for the first time: the list of finalists included 116 restaurants from 11 cities. The total number of the Awards nominees made up record-breaking 1,140 restaurants from 40 Ukrainian cities! They included the restaurants which have nominated themselves for participation in the Awards and had been given most votes of the Awards experts as well as the restaurants which had been recognised to be the best in their nomination. Each of 116 finalist restaurants had been attended by the members of the Awards Jury at least twice. Jury of the National SALT® Restaurant Awards are the famous restaurateurs of Ukraine whose restaurants do not participate in the competition. The main assessment criterion which gave 50% of the result was cuisine. In addition, the Jury assessed service, atmosphere and specialisation of the restaurant.

Masters of the ceremony, Vasilisa Frolova and Vladimir Ostapchuk, emphasised that there had never been so many famous Ukrainian restaurateurs on the same stage before. The Jury members expressed their gratitude to Hoteliero® Hoteliers and Restaurateurs Club and its President Andrey Skipyan for having arranged the Awards at the high professional level, and Maksim Khramov emphasised that the main thing in the industry is love as the most important occasions are traditionally celebrated in restaurants.

The winners were awarded with the SALT® copper frying pan manufactured by deBuyer, the French company which has been producing dishes and utensils for hospitality professionals. The same frying pan is used by majority of starred chefs of France. The award stands on the unique board from old North American barns of 18-19 centuries provided by Ebony and Co.