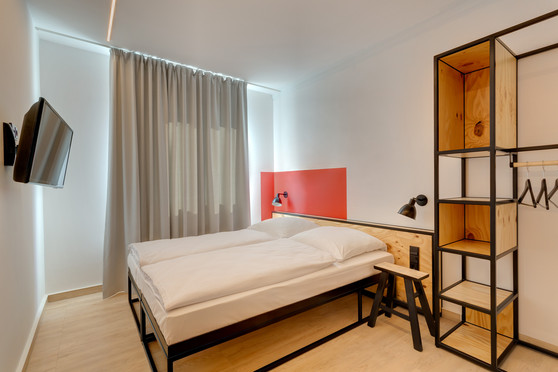 On 1 April, the MEININGER Group will open its first hotel in Leipzig at the heart of the city, close to the main railway station. Located in the old town, it is the ideal starting point from which to explore the city. Countless shops, cafés and restaurants can be found in the near vicinity and numerous city sights are just a short walk away.

A modern hotel with a design and furnishings exuding local flair. “It was important to us for the city to become a part of the hotel and its personality. Particularly Leipzig’s diverse modern art and cultural scene inspired the theme of “Art in Progress”, which is now reflected in a colourful, entertaining manner in the hotel’s public areas and rooms. A unique atmosphere has been created in which our guests will feel entirely at home,” emphasises Hannes Spanring, CEO of MEININGER Hotels.

Leipzig’s culinary highlights also form part of the concept. “We will serve local specialities at the bar,” says Maren Anders, Operations Manager at the hotel. “Among others, we will offer local gins of which three originate from Saxony and one is from the neighbouring state of Thuringia. The “Long Horn” gin is even from Leipzig itself. The traditional Leipzig beverage Kräuter Wilhelm can be enjoyed on the rocks or – similar to Pimms – combined with other ingredients to create trendy long drinks and cocktails.” Tasty souvenirs such as Leipziger Lerche pastries are also available at the hotel and complete the range of local culinary offerings.

The hotel amenities guarantee the typical MEININGER standard. Beside the classic public areas such as the lobby, lounge, breakfast room and bar, there is also a games zone and guest kitchen in which MEININGER guests are able to prepare their own meals at any time. The flexible room concept of MEININGER Hotels means that a total of 404 beds will be available in the 126 rooms, which range from traditional double rooms to private rooms with multiple beds right up to dorm rooms with up to four beds. Complimentary Wi-Fi is available throughout the entire hotel.