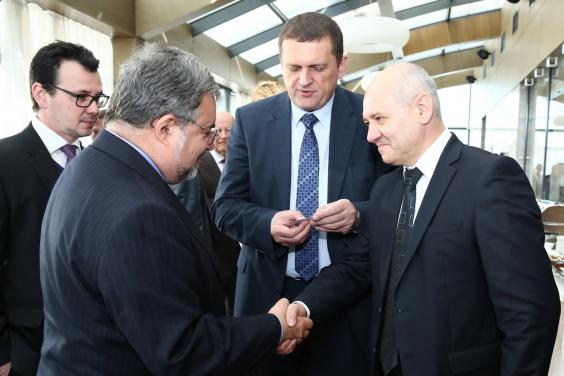 The grand opening of the Honorary Consulate of Brazil took place in Kharkiv September, 22.

“Our countries have long positive and friendly relations. Only in 2015 the foreign trade turnover of Kharkiv region with Brazil reached $ 1.3 million. We have a clear relationship in the field of IT-technologies, cultural and educational activities,” said Mark Becker, Deputy Head of Kharkiv Regional State Administration.

“Brazil is interested in the student exchange programs. Brazil is home to 500 thousand Ukrainians, they are learning the Ukrainian language and, of course, interested in establishing cooperation with universities of Kharkov. Also in Brazil there is a great interest in the Ukrainian young professionals of engineering and medical specialties “, – said Sergey Kutsevlyak.

Osvaldo Beate, Ambassador Extraordinary and Plenipotentiary of the Federative Republic of Brazil in Ukraine emphasized that he considered the Kharkov region one of the most important regions of Ukraine, where huge potential is concentrated  and there are all conditions to develop further cooperation.