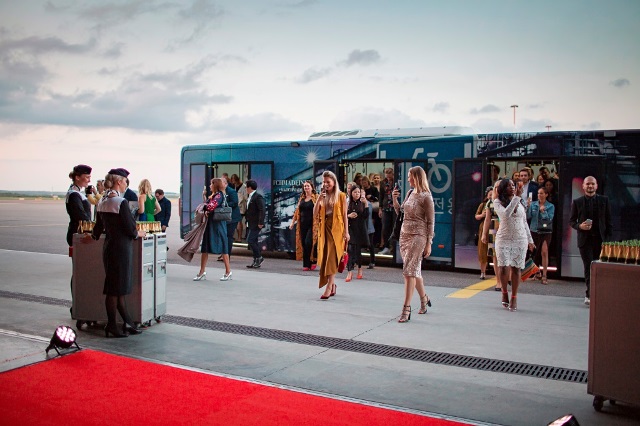 Finnair has been connecting east and west for 35 years, and Helsinki Airport has grown into a major hub for travel between Asia and Europe. Finnair and Finavia, the operator of Helsinki Airport, are celebrating this milestone with a short film that speaks of meaningful encounters that take place when people travel.

To illustrate the concept of meaningful encounters, Finnair and Finavia brought together two filmmakers from opposite sides of the globe to create a short film. The end result is a 13-minute short film titled “East and West Side Story”, directed by Swedish director Johan Storm and Korean director Wookie, both celebrated directors in their respective countries. The film will be introduced during an exclusive premiere at Helsinki Airport on September 6, 2018.

Each director shot their own perspective of one emotional story, written by screenwriter Danny Sangra. The leading roles are played by Scandinavian actress Anne Bergstedt, best known for her work in Boardwalk Empire and in the Black Swan, and Korean Jae Hoon, who has appeared in several theater and film productions in his home country.

The short film is the third and final event of the Match Made in HEL concept series, a joint marketing campaign by Finnair and Finavia. In 2015, Match Made in HEL turned Helsinki Airport into a skate park for professional skateboarders. In 2016, Finnair and Finavia held a stunning fashion show with seven designers from Europe and Asia on the actual runway of Helsinki Airport.

“Travel enriches people’s lives and opens new perspectives,” says Johanna Jäkälä, Vice President, Brand, Marketing and Customer Loyalty at Finnair. “We see this every day on our flights. Everyone travels for a reason – and all of us carry our own stories with us. The film is about how these stories change when you put yourself in someone else’s shoes, but also about the need for personal space. Something that is very Nordic.”

“Helsinki Airport is a true crossroads for east and west. Travelling unites people and cultures, and increases understanding towards each other,” says Katja Siberg, Senior Vice President Marketing, Communications and Customer Experience at Finavia. “You always learn something new. Every day, we see at the airport how tens of thousands of people from different parts of the world meet each other and experience meaningful moments. Art, as a universal language, can also combine these two worlds uniquely, and a movie is a natural way for telling stories about these encounters. We are excited to soon share these airport moments with the world.”
Finnair connects 19 destinations in Asia and seven in North America to over 100 destinations in Europe via its Helsinki hub, and is undergoing the fastest growth phase of its history. This summer, Finnair flew 97 flights per week to Asia, more than ever before. At the same time, Helsinki Airport is undergoing a massive expansion program to serve up to 30 million passengers annually.

First Movie Made by an Airline and an Airport