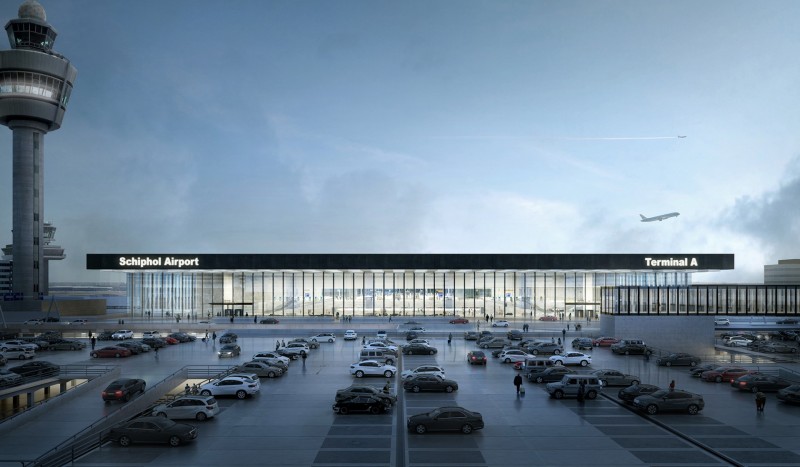 Amsterdam Airport Schiphol has chosen the design of KAAN Architecten for their new terminal. The new terminal will open in 2023 and will allow 14 million more passengers to travel through Schiphol annually. The new terminal is an expansion of Schiphol’s existing terminal, making it possible to retain the one terminal concept. The consortium’s innovative thinker is Arnout Meijer Studio from The Netherlands.

The expansion is required in order to strengthen the competitive position of Mainport Schiphol, to keep pace with the growth in aviation and to continue to enhance the position of ‘Europe’s preferred airport’ among both airlines and passengers.

One terminal concept
The new terminal will form an expansion of Schiphol’s existing terminal and will adjoin Departure Hall 1 and Arrival Hall 1. Keeping the buildings together allows Schiphol to retain the one terminal concept, and ensure that all the facilities are under one roof. The last time that Schiphol permanently expanded the terminal was in 1993, when the current Departure Halls 3 and 4 and Arrival Halls 3 and 4 were built.

Capital Programme
Royal Schiphol Group is carrying out the expansion projects under the auspices of the project organisation known as the Capital Programme, which is able to coordinate and manage the various complex, large-scale projects in an optimal way. This is necessary, as the airport must continue to operate as it would normally during the construction and renovation work. The expansion also requires specific knowledge and experience. Schiphol has brought this expertise together in the Capital Programme.

Other design entries
Capital Programme director Bernardo Gogna on behalf of the jury: “We, at the Capital Programme, were overwhelmed by the craftsmanship, the passion and the quality shown by all the design teams. It was an honour to receive them and to be inspired by their designs. We would like to thank all the participating design teams sincerely for their incredible effort and dedication. We also want to thank them for their contribution to the debate on the future of Schiphol and on aviation terminals.”