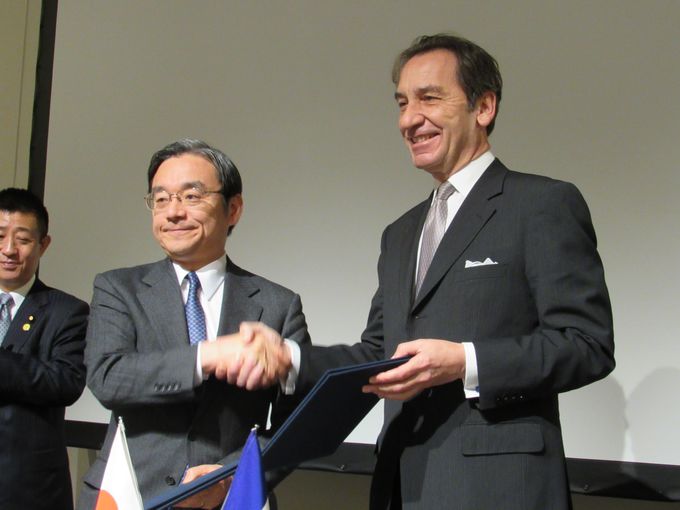 Airbus welcomes the signature of a new chapter of the Memorandum of Cooperation (MoC) in Civil Aeronautical Industry between the Ministry of Economy, Trade, and Industry of Japan (METI) and the Directorate General for Civil Aviation of the Ministry of Ecology, Sustainable Development and Energy (MEDDE) of the French Republic.

The agreement was signed today in Tokyo between Toshihide Kasutani, Director-General, Manufacturing Industries Bureau of METI, and Thierry Dana, French Ambassador to Japan.

With this agreement, which aims to strengthen the cooperation between Airbus and the Japanese industry, an Airbus-Japan Ad Hoc Civil Aeronautical Industry Working Group will be established, and it will meet on a regular basis to discuss technology fields that could be considered for cooperation between Airbus and Japan such as material, aircraft system and equipment, or manufacturing technologies for the development of future Airbus aircraft.

“We are very pleased that Japan and France are together providing support for enhancing our partnerships between Japan and Europe,” said Stéphane Ginoux, President of Airbus Japan. “We see Japan as a key country for partnerships in areas such as future aircraft technologies, R&T and digital innovation. We are committed to expand our industrial footprint in Japan further.”

METI and the Directorate General for Civil Aviation (DGAC) have agreed to enhance cooperation and partnerships between Japan and France since 2013.