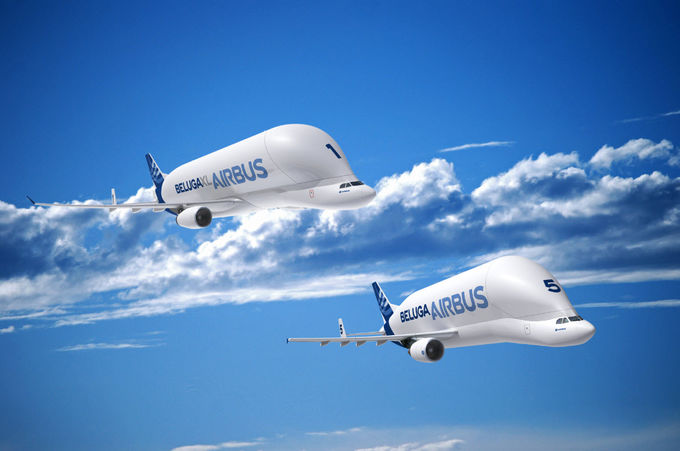 When Airbus’ Beluga XL oversize cargo airlifter enters service, it will have the same visual appeal as its well-loved predecessor – the A300-600ST Super Transporter, more commonly known as the Beluga ST – thanks to the design of its nose and main cargo door.

The whale-like face that earned the original Beluga its nickname is iconic – however it wasn’t always certain this distinctive feature would be carried over to the new-generation Beluga XL, which was launched in 2014 based on Airbus’ highly-versatile A330 jetliner. In contrast, the A300-600ST is derived from the company’s shorter-fuselage A300.

Favourable aesthetics played no major role in the Beluga XL’s “facial” design, rather it was a combination of cost targets and payload and ground infrastructure requirements. “To avoid excessive development costs, we re-use the nose landing gear from our base aircraft, the A330,” said Yael Marion, nose fuselage and main cargo door programme leader at STELIA Aerospace – which is one of the aircraft’s major aerostructure suppliers. “This impacts the cockpit position, which is even lower than on the current Beluga ST.”

This was a real challenge, but Marion is confident his team’s work packages will be ready on time to feed the Toulouse, France final integration line. “There is still some way to go, but we’re all proud of our achievements so far,” Marion added. “At the end of August 2016, more than 50 per cent of the elementary parts had been built and 15 per cent of the assembly had been completed.”

This on-schedule development was underscored by Bertrand George, Head of Beluga XL programme, who said that Beluga XL assembly activity on the final integration line should begin by the end of 2016.

Starting in mid-2019, the Beluga XL will gradually replace the existing five-member Beluga ST fleet – which is used for carrying complete sections of Airbus aircraft from different production sites around Europe to the final assembly lines in Toulouse, France and Hamburg, Germany. The fleet had 5,000 total flight hours in 2012 and that number is projected to be 10,000 in 2017.

Hervé Demoinet, who is leading the team preparing the Beluga XL for entry into service, noted that the Belugas – both the ST and XL – will play a major role in future production ramp-ups. “Both versions will operate in parallel for a while, but we’ll begin phasing out the ST by the end of 2020,” he says. “Thanks to the XL’s larger volume, we can transport the same capacity with 30 per cent less flight hours.”